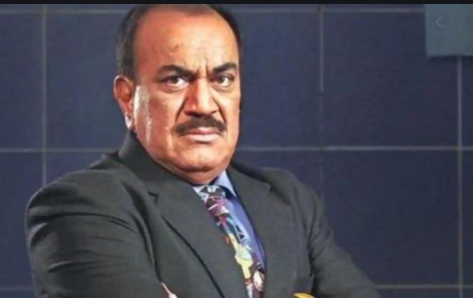 This is not just common hand movement instead ACP is trying to explain the electron spin quantum number.
(Every electron has 4 quantum numbers which tell it’s location{If you have studied about quantum entanglement then you might know this} one of the 4 numbers is the electron spin quantum number. An electron can have a positive (spin up) or negative spin(spin down).
This is confusing and actually an electron does not spin in one direction it is in a superposition{both type of spin at one time} it is like a coin spinning on a table it can be head or tails; equal chances thus it is in a super position(If you are confused then do not worry cause Einstein was too confused and said it is spooky.))

Now you know that what is super position and the hand of the ACP is in a superposition as it is up spin and down spin at the same time (Until we do not pause the video).
ACP was always trying to depict a state of superposition but the audience was so
unscientific to understand…

I also created a page for updates and you should visit it from the menu or rather CLICK HERE . and do not forget to give me your feedbacks there

Rahul Gandhi is still trying to understand the superposition thing so he is re reading the blog and you should too re-read the blog if you were unable to understand.
That is the reason he will not say bye bye. So…

SNF is there again Tejasvi people !!!!

Why the Duck I wrote this.

DO NOT FORGET TO DONATE IN THE COMMENT BOX…

7 Replies to “When a police officer is an astrophysicist…”